I’m usually the first one up in the morning and I confess that I set my alarm early enough to make sure of this.  The house is quiet and peaceful—and usually no one will need me for about an hour.  Which is good, because I’m not at my temperamental best until six-thirty or so.

Except this morning, as I shuffled into the L-part of the living room I call the dining room and the rest of the family calls Mommy’s Mess, I heard a weird sound.  Sunny lost her Tinkerbell wristwatch in April, so we’re all used to a disembodied triple beep every 60 minutes,* but this was a steady alien buzz.

The first thing that crossed my mind—and this is why I don’t go into my subconscious unarmed—was that the wristwatch had finally gone into overload and we needed to evacuate.

In the manner of all brave Mommies—or TSTL horror movie victims, whatever—I ventured closer to pinpoint the sound and discovered Sunny’s pink Barbie guitar singing to itself in falsetto wasp.**    I picked the thing up and slid the pink bar to the center, but the hum started to rise in volume and pitch.

I found the off button and jabbed it.   A cheerful Barbie voice starting chirping, “Goodbye!  Goodbye!” over the ever increasing noise.

This didn’t help my bomb-threat delusion at all.  I fought the urge to throw open the front door and hurl  it into the front yard while screaming, “Incoming!”

Because it’s cold out there.

So I slapped it a good one, which reset the pitch and shut Barbie up, but didn’t do anything for the volume.   Pretty soon, the damn thing was going to wake the kids.

Flipping it onto its stomach, I found the battery hatch, which had been thoughtfully screwed down by people who were worried my offspring might decided to pry it open and put the shiny coppertopped things in their mouths.  The fact that they’re probably right didn’t make it any less frustrating, except— 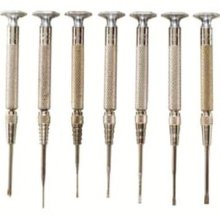 I ran to the kitchen, pink demon instrument in hand, tore open the Everything Drawer and found the set of jewelers’ screwdrivers I’d been given for our wedding shower.  The third Philips was small enough, and the hatch sprang open to reveal a number of double-A batteries that weren’t budging.

I could have used the screwdriver to lever them out, but I opted for whacking the guitar over the chair back instead, sending batteries flying.

I felt like Jimi Hendrix.  Or maybe Garth Brooks.

I re-screwed the hatch and leaned the guitar next to Sunny’s bedroom door before going back to my mess and typing  up the whole story just so I could suggest this:

If you’re looking for a holiday gift to give the parents of small children,*** especially if you’ve given the small children anything with batteries, please consider a set of small screwdrivers that include both slotted and Phillips.

They will thank you.

Psst:  And if the thing you gave the small children makes noise?  Don’t bother with the extra batteries.  Please.

*Yes, we’ve looked for it.  On the floor, inside furniture, behind books in the bookcase, under everything—I drew the line at having the cat x-rayed.  We suspect it was pushed through a vent somewhere, but the adults in the family don’t care that much.  We are, however, extremely impressed with the battery life.

***The smallest size is good for repairing eyeglasses, too, if one could only find the flippin’ screw once it falls out.

4 thoughts on “A Great Gift Idea, or A Funny Thing Happened Before Caffeine This Morning”