One hundred and forty-four hours a month, I work in the genealogy and local history department of our downtown library.

But two Saturdays a month, I work the reference and info desk at our east branch, which gives me the opportunity to do Reader’s Advisory—which I love—and be on hand for some great programs.

This afternoon, the library hosted a Fancy Nancy party. 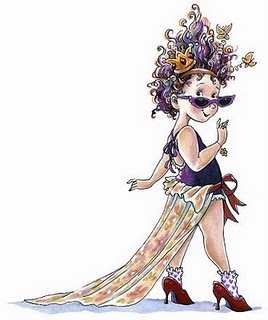 For those of you who have male children or haven’t yet discovered the glamorous creation of Jane O’Connor and Robin Preiss Glasser, Miss Nancy Clancy  is convinced that lace socks make you run faster, everything sounds better in French, and accessories make the outfit.  Her doll,  Marabelle Lavinia Chandelier, is also used to the fanciest accoutrements.

Over one hundred and fifty like-minded young ladies visited the library this afternoon to make crowns and wands and eat pink-iced cookies and drink raspberry or peppermint tea out of paper cups with images of Victorian teacups taped on, and weave their way through the building in une promenade grande de petites filles.*

My two Fancy Nancies were a part of it all, wearing last year’s matching Easter dresses—and pink sweaters, Easter being what it is around here—which were almost too small for Jane and just this side of too big on Sunny. But they looked fabulous anyway, naturellement.

And I scored a couple of hugs, which broke up the day nicely and shocked a couple of my younger regulars:  Library Ladies gots kids?

It’s no surprise that we did a brisk trade in Fancy Nancy books, fairy books, Eloise books, Olivia books, and any picture book featuring a princess. I don’t think there was anything of the kind left to check out at close—except for Jade the Disco Fairy,** which was vetoed in my presence by at least three parents or grandparents and no wonder. 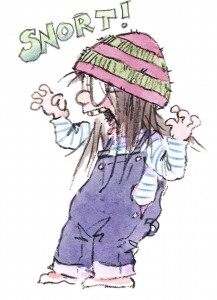 But there was this one kid who wasn’t interested in any of this fancy stuff, thanks very much. Her mother came up with an armload of books for her sister, who was wearing Tinkerbelle’s wedding dress, and asked me if there was a picture book for a six-year old Anti-Nancy. “She doesn’t like pink, she doesn’t like frilly, and she doesn’t like to read much.”

I took one look at this kid, who had a “Just try it, Library Lady,” expression on the part of her face that wasn’t covered with a dark purple knit hat, and asked her if she liked Shrek. I received a reluctant nod. So I went to the shelf and pulled Miss Brooks Loves Books (and I don’t) by Barbara Bottner and Michael Emberley.

“This book,” I said, “is about a kid who thinks books are a waste of time. But she has to do a book talk for Book Week, which means she has to find a book she likes.”

“Does she?” asked the mother, with a hint of desperation.

“Once she finds one with warts in it.”

A hand snaked out and took the book. Pages were flipped. I think I saw a small smile under the knot hat.

I handed another one to her mother. “And here’s the original Shrek, just in case.”

She looked at the cover and shuddered. The sister said, “Ewww, gross!”

And I definitely saw a smile under the hat.

___
*Is that right? Grace? Bonnie? Anyone else who took French instead of German?