Janie and Sunny have a playroom.

The natural state of this playroom is complete and utter chaos.

This is neither cliche, nor hyperbole.

Until yesterday afternoon, despite their parent’s numerous requests, pleas, bribes, outright threats, and one of Mrs. Piggle-Wiggle’s patented cures*— the room looked like this: 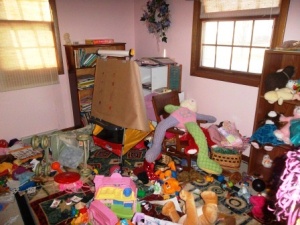 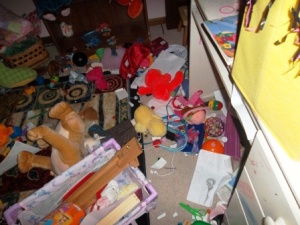 I would have taken an image of the closet, but I couldn’t get to it.

I’m not a big fan of housecleaning,** but there is a line, and this room crossed it.  So my husband took the kids to the family museum, and I grabbed a roll of garbage bags, clapped on my headphones, and got to work.

Three hours of high-octane music later, The room looked like this: 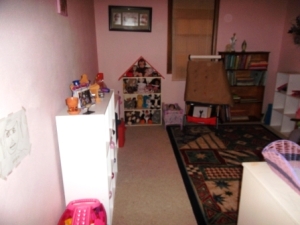 Never underestimate the power of my Adrenaline Playlist.

I pitched two full garbage bags of broken or damaged toys, orphaned game bits and puzzle pieces, desiccated art supplies, dismembered dolls, crumpled paper, old workbooks, and plenty of etcetera.   Doll clothes were sorted by baby, American Girl, and Barbie.  Barbies and Barbiesque dolls, who were mostly naked, were given their own bin in which to party and Sunny’s baby dolls were put to bed or to snooze in the stroller.  Sunny’s collection of Odd Creatures*** were incarcerated in their own pale-pink bin. I separated and isolated three sets of blocks and a Jenga set, and needless to say, the books were rescued and rearranged.

There’s even room for future Christmas and birthday gifts in there.

There’s a garbage bag of plastic toys^ and two of stuffed animals waiting for someone to miss something.  Anything that isn’t claimed after a week will go to our area’s domestic violence shelters.

Oddly enough, the kids love it.  They could find stuff.  They played in there until bedtime and put everything away when they were done.

We’ll see how long the honeymoon period lasts—but I’ll tell you one thing:

Except for this weekend, when I start on their bedroom.^^

*The one that claims if you refuse to put away your child’s toys, he or she will eventually have to put everything away to either find a particular toy or get to the door.  And just in case you’re wondering, I’m fully aware that Mrs. Piggle-Wiggle is a fictional character, but it sounded logical at the time.

**To the same degree that Don Juan was not a proponent of monogamy and the Marquis de Sade did not delight in Sunday School picnics.  Which should have been my first clue that the Piggle-Wiggle cure wouldn’t work.

***True story:  I’d warned the kids I was doing this and told them to remove any toys they absolutely wanted to keep, because I might not know.  Sunny ran to the room and came back with a long, stuffed pink leopard-spotted snake looped twice around her neck, carrying Itch, an orange plastic stegosaurus, two matchbox cars, the ugliest stuffed bat I’ve ever seen, and a handful of mini-rubber duck in various outfits (a doctor, a football player, and a Chinese duck complete with traditional headgear and “mandarin” jacket—rubber duck puns are weird).  Her Bubbleguppy was already under her pillow.  Jane, who was playing a computer game, decided to trust me, though it’s possible the question didn’t register.

^Most of these  go beep, baa, vroom, r-r-r-r-r-r-r-r, or belt Hannah Montana tunes—I’m pretty sure it’s not necessary to explain that this is not a coincidence.

^^ If I can bend enough to pick things up by then.  My back thighs feel like someone took a baseball bat to ‘em, which makes sense—I did the equivalent of five thousand toe-touches, standing and sitting.  My sinuses have yet to forgive me, either, but that’s a given.