Maecenas, you, beneath the myrtle shade,
Read o’er what poets sung, and shepherds play’d.
What felt those poets but you feel the same?
Does not your soul possess the sacred flame?
Their noble strains your equal genius shares
In softer language, and diviner airs.
While Homer paints, lo! circumfus’d in air,
Celestial Gods in mortal forms appear;
Swift as they move hear each recess rebound,
Heav’n quakes, earth trembles, and the shores resound . . .

Phillis Wheatley’s  first poem, “On Messrs. Hussey and Coffin,” was published in December  of 1767,  in the Newport, Rhode Island, Mercury, before she was fourteen years old:

Did Fear and Danger so perplex your Mind,
As made you fearful of the Whistling Wind?
Was it not Boreas knit his angry Brow
Against you? or did Consideration bow?
To lend you Aid, did not his Winds combine?
To stop your passage with a churlish Line,

Did haughty Eolus with Contempt look down
With Aspect windy, and a study’d Frown?
Regard them not; — the Great Supreme, the Wise,
Intends for something hidden from our Eyes.
Suppose the groundless Gulph had snatch’d away
Hussey and Coffin to the raging Sea;
Where wou’d they go? where wou’d be their Abode?
With the supreme and independent God,
Or made their Beds down in the Shades below,
Where neither Pleasure nor Content can flow.
To Heaven their Souls with eager Raptures soar,
Enjoy the Bliss of him they wou’d adore.
Had the soft gliding Streams of Grace been near,
Some favourite Hope their fainting hearts to cheer,
Doubtless the Fear of Danger far had fled:
No more repeated Victory crown their Heads.

And she didn’t know a word of English until she was at least seven. 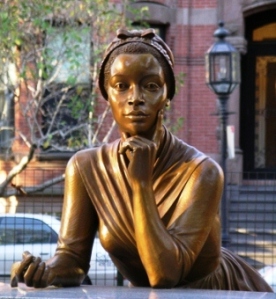 The child who would become Phillis Wheatley was born in West Africa around 1753.  She was kidnapped in 1761, brought to America on a slave ship, and sold to John Wheatley, who wanted a personal servant for his wife, Susanna.

The Wheatley family soon discovered how bright and curious the newly christened Phillis was, and decided, against custom and practice, to teach her to read and write.  She became fluent in English in two years before moving on to Greek and Latin.

Ten years later, the elegy she wrote for the esteemed Reverend George Whitefield* was published as a broadsheet and distributed throughout the Colonies—making her the first black, female poet to gain popular interest in the Americas.

Word of her talent reached England and in 1773, Ms. Wheatley was escorted by John and Susanna’s son to London, where her first book, Poems on Various Subjects, Religious and Moral, was published. She was apparently a terrific social success there, though she had to return home later that year because Susanna fell ill.

While it’s tempting to marvel at Ms. Wheatley’s accomplishments simply because she was an enslaved woman  who  accomplished them in the time and place that she did at the pace that she did, I find that kind of praise . . . uncomfortably patronizing.

Phillis Wheatley is a fine poet.

Most of her work is seriously, relentlessly Neoclassical—dense with allusions and metaphors and more couplets than even Alexander Pope might have deemed strictly necessary.

This style isn’t to everyone’s taste.  To be honest, it’s not always to my taste.

Some of her poems, particularly the elegies—and she wrote a lot of elegies—take a little more work for those of us who were educated in American public school systems  and aren’t up on all the references.**

They can also be a bit much for those of us who appreciate a whimsical sense of humor—Ms. Wheatley is earnest and elegant and persuasive, but quirky she ain’t.***

But for all that, Ms. Wheatley has a way with context and though one may not catch all the dropped names, her meaning is usually clear and beautiful as a stained glass window.  As is her enthusiasm, especially when she’s writing about something other than death and piety.

Thy various works, imperial queen, we see,
How bright their forms! how deck’d with pomp by thee!
Thy wond’rous acts in beauteous order stand,
And all attest how potent is thine hand.

From Helicon’s refulgent heights attend,
Ye sacred choir, and my attempts befriend:
To tell her glories with a faithful tongue,
Ye blooming graces, triumph in my song.

Now here, now there, the roving Fancy flies,
Till some lov’d object strikes her wand’ring eyes,
Whose silken fetters all the senses bind,
And soft captivity involves the mind.

Imagination! who can sing thy force?
Or who describe the swiftness of thy course?
Soaring through air to find the bright abode,
Th’ empyreal palace of the thund’ring God,
We on thy pinions can surpass the wind,
And leave the rolling universe behind:
From star to star the mental optics rove,
Measure the skies, and range the realms above.
There in one view we grasp the mighty whole,
Or with new worlds amaze th’ unbounded soul.

Though Winter frowns to Fancy’s raptur’d eyes
The fields may flourish, and gay scenes arise;
The frozen deeps may break their iron bands,
And bid their waters murmur o’er the sands.
Fair Flora may resume her fragrant reign,
And with her flow’ry riches deck the plain;
Sylvanus may diffuse his honours round,
And all the forest may with leaves be crown’d:
Show’rs may descend, and dews their gems disclose,
And nectar sparkle on the blooming rose.

Such is thy pow’r, nor are thine orders vain,
O thou the leader of the mental train:
In full perfection all thy works are wrought,
And thine the sceptre o’er the realms of thought.
Before thy throne the subject-passions bow,
Of subject-passions sov’reign ruler thou;
At thy command joy rushes on the heart,
And through the glowing veins the spirits dart.

Fancy might now her silken pinions try
To rise from earth, and sweep th’ expanse on high:
From Tithon’s bed now might Aurora rise,
Her cheeks all glowing with celestial dies,
While a pure stream of light o’erflows the skies.
The monarch of the day I might behold,
And all the mountains tipt with radiant gold,
But I reluctant leave the pleasing views,
Which Fancy dresses to delight the Muse;
Winter austere forbids me to aspire,
And northern tempests damp the rising fire;
They chill the tides of Fancy’s flowing sea,
Cease then, my song, cease the unequal lay.

See?  Totally worth the work.

I suspect that Phillis Wheatley must have been very much aware of her audience—which certainly makes sense—and there’s a certain perfectionism in her word choice and meter that speaks of great, deliberate care.

It’s only occasionally that she allows herself to relax a bit and show the ease with which she could write and might have written under different circumstances.  The verses she wrote on her visit to England are among these.  There are cultural comparisons and just a soupçon of Colonial awareness of politics, but I like to imagine that she was in an exhilarated frame of mind.

I.
A bird delicious to the taste,
On which an army once did feast,
Sent by an hand unseen;
A creature of the horned race,

Which Britain’s royal standards grace;
A gem of vivid green;

II.
A town of gaiety and sport,
Where beaux and beauteous nymphs resort,
And gallantry doth reign;
A Dardan hero fam’d of old
For youth and beauty, as we’re told,
And by a monarch slain;

III.
A peer of popular applause,
Who doth our violated laws,
And grievances proclaim.
Th’ initials show a vanquish’d town,
That adds fresh glory and renown
To old Britannia’s fame.

And here’s another, in response to a discussion of the first one among the literati of England.

An Answer To The Rebus, By The Author Of These Poems
(Phillis Wheatley)

The poet asks, and Phillis can’t refuse
To show th’ obedience of the Infant muse.
She knows the Quail of most inviting taste

Fed Israel’s army in the dreary waste;
And what’s on Britain’s royal standard borne,
But the tall, graceful, rampant Unicorn?
The Emerald with a vivid verdure glows
Among the gems which regal crowns compose;
Boston’s a town, polite and debonair,
To which the beaux and beauteous nymphs repair,
Each Helen strikes the mind with sweet surprise,
While living lightning flashes from her eyes,
See young Euphorbus of the Dardan line
By Manelaus’ hand to death resign:
The well known peer of popular applause
Is C—-m zealous to support our laws.
Quebec now vanquish’d must obey,
She too much annual tribute pay
To Britain of immortal fame.
And add new glory to her name.

That couplet about Helen?  Excellent.

Shortly after she returned to the Colonies, the Wheatley family freed her, partially due to pressure from her new English friends. But she stayed with the family and took care of John and Susanna, both in poor health, until they passed away.

The rest of her story isn’t much fun. She married in 1778, but was soon abandoned by her husband. Though she kept writing, always, only five more of her poems were published during her lifetime.  Eventually, she took work as a servant and died penniless in December of 1784.

She remains to this day, however, a remarkable woman who wrote remarkable poems.

* An Elegiac Poem, on the Death of that Celebrated Divine, and Eminent Servant of Jesus Christ, the Reverend and Learned George Whitefield can be found here.

** If you don’t know, for example, that Maecenas was a wealthy Roman patron of the arts around 40 BC and acted as a sort of unofficial minister of culture to his good friend Caesar Augustus—yeah, the same guy who allegedly hauled a pregnant lady all the way to Bethlehem so he could get a head-count—you might not read the verse at the top of this post in quite the same way.  I sure didn’t.

***With the possible exception of the poem she wrote about sailing to England.  She never mentions seasickness outright, but it’s in there and it made me smile.