My parents arrived last night, an overnight stop on their way to St. Louis.   When they left, they took both kids with them.

Despite the packing, the Great Toothbrush Debate, and the careful counting of ‘sleeps’ in the hopes that Sunny wouldn’t explode from excitement until she was well away, it didn’t really sink in until this morning, after I’d already located two lunchbags and pulled four slices of bread out of the bag, all the while talking to Janie about how much fun she was going to have at Six Flags, what to do if she was lost, and how she needed to look after Sunny, maybe we should go over our phone numbers one more—

I looked at the  knife.  “Making your lunches for—oh, wait.  You’re not going to camp today, are you.”

So that’s how eating a pb&j for breakfast was my last sacrificial act of parenting for four days.

I have to work today—it’s my one night a month—but after tonight I’m off until Saturday.

Those of you without kids—and I know there are a few of you out there, somewhere—may not understand the feeling of freedom, verging on vertigo, that this has given me.

A few of you might even wonder if  celebrating this might not be just a bit close to Bad Mommy territory.

I’m wondering that myself.

See, I once mentioned on a forum, in response to a thread about how we fit writing into our lives, that since I had two kids under ten and a full-time job, most of my ‘solid writing time’ was before they woke up and after they went to bed, and that sometimes my husband took the kids away for a couple hours on the weekends so I could fit in a little more.  Otherwise, I did the scribbled notes thing throughout the day.  I wished I had a whole day to write, sometimes, but the kids wouldn’t always need me like they do, so I’d keep on trucking until I did—or words to that effect.

Or maybe not quite to that effect, since the moderator of the thread immediately replied that children were a choice and since I chose to have them, it was ironic that I was complaining about the time they took out of my day.  And that some people have a whole day to write because they’re disabled, or unemployed,so where did I get off envying them with my able-bodied, employed privilege?  And she herself was working two jobs and taking care of her elderly mother, so I should probably get over myself.

I got over myself so much that I apologized to the thread for not understanding the question and for implying that I was Busier Than Thou and quit the forum.

That was four years ago, and I’m still trying to parse it out.

The thing is . . . my children were both choices.  Janie was a gift and Sunny was a bona fide miracle.  I love them and am amused and amazed by each of them every day.  My world—the entire world— is better because they are in it and if there ever comes a time when I’m called upon to trade my life for theirs, tell me where to sign and get the hell out of my way. 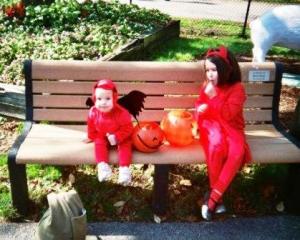 But that doesn’t mean I don’t get impatient and annoyed with some of their behavior—and vice versa,  no question.  That doesn’t mean I don’t occasionally want to  pursue a plot thread or enjoy someone else’s words or play Plants vs. Zombies—or clean the grout with my fingernails—rather than read Barbie and the Three Musketeers for the fifteenth time in three days.*

And it doesn’t mean my offspring and I don’t need a break from each other—from the mutual whining and nagging and revolting choice of favorite foods and the bedtime battles.  And, for the love of all that has ever been holy, Pokemon.

I’m looking forward to watching my favorite shows when they actually air and to not watching anything animated or geared to the Disney demographic.** I’m gonna have zucchini tarts for dinner with companions who won’t make horrible faces at the thought and eat ice cream in the living room without worrying about setting a bad example.  I’m going to sleep-in, see a PG or R movie or two without using the mute button and subtitles, stay up as late as I want to finish that Alexandra Sokoloff novel . . . and I’m gonna write.

It’s going to be great.

Of course, the reason this time is going to be so enjoyable is that it’s short.*** I’m going to get them back.

I’m expecting to get a little anxious around Thursday and I insisted on phone calls every bedtime. I’m a little anxious now, thinking about nights without giggles and tickles and Super Sunny stories, or questions about how the universe works and why it isn’t a little more sensible and maybe just one more page of Calvin & Hobbes.

But I filled up on hugs before I left this morning and I’m glad they’re getting this time with their grandparents.

And that I’m staying home.

Yeah, pretty soon, I’ll realize that filling up on hugs isn’t possible and maybe I won’t be so glad that the majority of their time won’t include me.

And that I’m staying behind.

But I’m thinking that this trial run should be pretty cool.

*Sunny is really good at finding that book, no matter where I’ve hidden it.

** I’d look forward to having the television off, but it’s baseball season and I’m outnumbered.