Random Thursday (ˈrandəm ˈTHərzdā): the day on which Sarah plunks down all the odd bits and pieces she’s acquired during the week in an effort to avoid writing a real post, the assembly of which usually ends up taking twice as much time as actually sitting down and creating genuine content.

Sometimes, though, there are themes.  And bacon.

Having received a terrific bacon-centric response to yesterday’s post, I went home and took the family out for dinner last night.  Not in celebration, but in the realization that a handful of dried spaghetti wasn’t going to feed the six of us.

Not only were there four signs hanging in the restaurant indicating that bacon is a great and good thing at any and all times,
they had a new, limited-edition Pie o’ the Month:

I don’t often experience descriptive wordfail, but this did the job.

Ladies and Gentlemen, I am already mentally standing in line for this movie, jumping up and down like a little kid.

Make of that what you will.

Just when I thought I could take a bacon break, Janie found Sunny’s school library book and read it out loud in the car this morning the whole way. 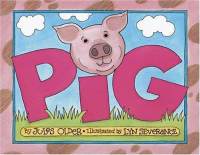 Pig, by Jules Older, is a book of Amazing Pig facts about things like breeds and behaviors and that the size of the biggest pig ever (2,552 pounds in 1933, name of Big Bill), the number of pigs in Alaska (approximately 1,000 very cold porkers), and the strange fact that there are more pigs in Norway than people.

Or that’s what I remember.  Except that pigs are one of the few animals that will stop eating when they are no longer hungry.  Which means we should all eat like pigs.  Pretty cool.

And yeah, I did ask Sunny to renew it so Janie could finish reading it on the way home . . . And to see if she could find Mr. Older’s Cow book, too.

(with perhaps a small ad—sorry)

I would skip Hansel and Gretel, Witch-Hunters for this.

No, you’re right—I lie.  But if they open on the same day at the same time, this one wins.

As with all poetry contests around here, the winner gets a Cafepress mug of your choice and the usual dubious bragging rights.

So far, there are already nine names in the Pink Cowgirl Hat of Win—half in the comments, half via e-mail, and one name is in there twice to make it mathematically possible.