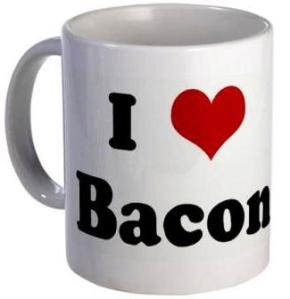 When I was a kid, I used to go to the large pond next to our house to fish, or my version of it.  Mom would give me a hunk of bacon fat only slightly less squidgy than a worm, and I’d lock it on a large safety pin tied to a string, tie the other end of the string to a stick, and drop the bacon into the murky water.  Five minutes later, I’d feel a tug and pull up the string to find twenty or so crayfish hanging onto the bait and the string and each other for dear life.

The power of bacon, y’all.

Similarly, when I went lazy last week and dropped the idea of a bacon-themed poetry contest into a post , sixteen of you answered the call and three of you wrote more than one poem.*

That’s nineteen names crammed into the slightly squashed Pink Cowgirl Hat of Win and I couldn’t be more tickled at the turnout.

We had couplets, limericks, haiku, free verse, a tastefully lurid number, a verse that was about as free as it gets without being prose, and even one that included a pigeon and pumpkin bread.

Everyone seemed to have a lot of fun with it, and I really wish I had the funds to say, “Mugs for everybody!” but, alas, the rewards of a poetry-loving librarian, while great, are not particularly financial, so I asked Janie to fish a name from the Hat this morning.**

So, without further etcetera, the winner of the Bacon Poetry contest is:

Let me know which mug you want, Downith—it doesn’t have to be bacon related—and send me your mailing address.

Thank you all for playing along!

*No, I’m not calling you a crayfish—I’m just riffing on the Power o’ Bacon.  Promise.

**Though Sunny did it instead because it was her hat and no one has the right to pull anything out of her hat but her, and tell Janie to stop touching my hat, Mommy!  It was a loud morning, unrelieved by bacon, which might have helped, except we were already running late . . .