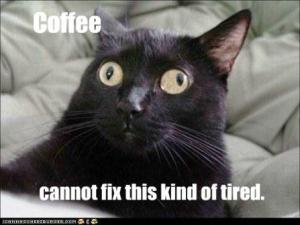 So . . . I arrived home from Bouchercon  (“Oh,  is that where you were?”) early yesterday evening, having achieved a truce with the GPS.*   I hugged and gifted and babbled like only an exhausted woman hyped on adrenaline and four bottles of diet Pepsi who is me can.

My homecoming, for those of you who didn’t see it on Facebook, went a little like this:

‎”So, how was the conference, honey?”
“I loved it! I learned a lot and met all these great people–”
“MooooooOOOOOOOoooooom!!!!”
“–Aaand I’m back.”

After baths and babble and a little Internet catch-up, I faceplanted into my own pillow and slept until 9:30 this morning, got up, and started doing laundry.  I swear, I didn’t pack this much . . .

But while I wait for the second load to dry,  I thought I’d do one final post about the experience.  I promise.

Pack something extra to wear just in case the weather gets nastier—or nicer—than it’s supposed to be.  And an umbrella.

Do not attempt the Rock and Roll Hall of Fame without sensible shoes, moleskin-lined fab shoes, or a blister-care kit.   Watson just reminded me that moleskin packs flat, so go with that.

Don’t skip lunch or a  substantial snack just to squeeze in one more panel—even if you had breakfast four mornings straight and screwed up your hunger cues—and remember to stay hydrated, or you, too, will get seasick during that last afternoon panel because your blood sugar tanked and the gentleman in front of you kept swaying fore and aft to see the speakers.

Speak to almost everyone you meet—some won’t want to go past hello or a remark about the lethargy of the elevators, but the others will turn out to be interesting people: librarians and readers and tattoo enthusiasts, writers whose books you love or will love,** and a few who are wondering what’s going on—I had a couple of great conversations with the server at my hotel bar, where I dragged myself every afternoon to have a very late lunch.

Writers and agents and editors are real people.  Most of them are really nice people.  And they really, really don’t mind you telling them how much you love their work, clients, new releases, or blog posts.

You don’t have to worry about finding something to read at Bouchercon, but you may have trouble finding time to read.

Take in everything—while eating and staying hydrated—it’s only for a few days, sleep is optional, if you’re gonna do it, do it!

And take a day or two off afterward to recover—if I’d gone to work today, I’d have died.

What I brought home:

Eleven swag books; three first chapter sampler books; three books I bought for me; five books I bought for other people; a charge on my Amazon account for four more and a DVD; two tee-shirts, five buttons, and six pencils for friends; seven new e-mail or phone contacts and three Facebook friends; something fun for Mom, who reads this blog so enough about that (Dad, you’re getting one of the Amazon-purchased books); clinical exhaustion ; and my new favorite necklace:

The book room was a treasure trove, but there were other hunters out there and I lost out a couple times.  I managed to snag one of two copies of Jaden Terril’s A Cup Full of Midnight, but couldn’t find any of Mike Cooper’s books for love or money—same with Duffy Brown and R.D. Cain (whose books, as I think I mentioned, were stopped at the Canadian border).

As for those swag books, I’m planning to mail one title to each of the four people who wrote me poems lamenting the lack of a Poetry Wednesday—and don’t think I didn’t notice that no one complained until I offered a bribe—Averil, independentclause, Odie, and Kev.  E-mail me your first and second choices and a mailing address (Averil and Kev, send me a reminder, because I don’t know where I put yours).  And thanks for humoring me. 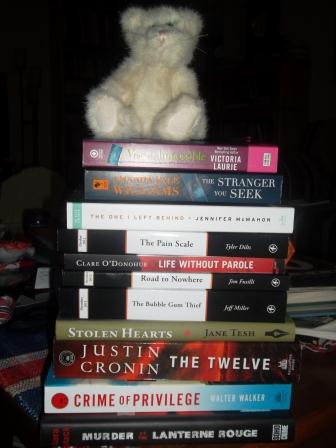 From top to bottom (cat not included):

The Stranger you Seek by Amanda Kyle Williams

The Pain Scale by Tyler Dilts

Life Without Parole by Clare O’Donohue

Road to Nowhere by JimFusilli

The Bubblegum Thief by Jeff Miller

The Twelve by Justin Cronin

The Crime of Privilege by Walter Walker

Murder at the Lanterne Rouge by Cara Black

It was a great time.  I highly recommend this conference for anyone who likes mysteries, cozies, thrillers, crime fiction, and general insights about writing and the business thereof—or who just wants to have a terrific time mingling with people who do.

The next Bouchercon is in Albany, which is probably not within solo driving distance for me, but if I can, I will.***  And if anyone would like to carpool, I can always pick up people along the way.

*She did lead me slightly astray on my way to meet Sherry Stanfa-Stanley for lunch—which really deserves its own post, because the whole trip was worth it just for that—but it wasn’t her fault, really, or mine, as her maps are four years old and the restaurant had moved.

**True story: twice, I ended up chatting to people for a while, only to find out that they were quite well-known authors.  I already mentioned Libby Fischer Hellmann, but Saturday night, I was talking with a friend of Alexandra Sokoloff and found out twenty minutes later that she was Heather Graham.  My patrons, who read anything of hers we can find, are going to plotz.

**I don’t mind flying, but I dislike airlines and airports (in general, not specifically) and loathe their business models.