It’s clear we need to lay some ground rules,” she said. “If we’re going to be stuck with each other, we have to figure a way to make this work.”

“Agreed.” Vom snorted. “I just don’t see why I have to make all the sacrifices.”

“My sense of reality has crumbled. I’m bound to a monster that wants to devour everything all the time, including me. And I’m pretty sure I’m going to lose my sanity eventually. So if I’m going to deal with that, the least you can do is not eat puppies.” 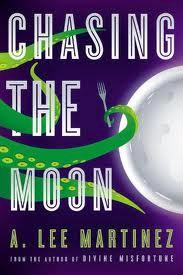 I really have no idea how this book ended up on my reserve list at the library.

It isn’t a new book (2011) , I don’t think I’ve read anything else by A. Lee Martinez—which I’ll be making up for, ASAP—and I don’t remember where I heard or read about it, or when I took the time to order it from another library system. But it arrived all the same, heralded by an automatic e-mail that puzzled me.

Of course, now that I’ve read it, its unexplained appearance in my life seems like par for the course.

Diana is in need of a new apartment, a new job, a new life. When the first of these shows up, fully furnished, at a ridiculously low price, she jumps at the chance . . . and discovers that the place comes with a couple of perks: paid utilities and a kitchen that restocks itself with anything she wants. Anything. Naturally there’s a catch or two—she has an unexpected roommate: Vom the Hungering, Devourer of . . . Everything . . . who happens to be an inter-dimensional monstrosity existing in her closet. And now that she’s his caretaker/anchor/symbiotic partner, she can’t leave the apartment as long as he’s trapped.

If she opens the closet door, he’ll eat her —he’ll feel bad, because she seems nice, at least through the door, but that’s never stopped him before. If she doesn’t open it, she’ll live forever and go slowly stir-crazy.

But Diane is resourceful, and figures a way to let Vom out of the closet without being the hors d’oeuvre to the world’s entrée . . . except now she can see all the things her mind had previously hidden from her in self-preservation—like the eyeballs peeking through the rents in the sky, the tentacled being at the grocery story, and why the building super warned her never to pat the little dog whining in front of Apartment Two—and the overstressed materials of reality are starting to bend to her will . . . and to her won’t, which is just as unnerving.

Plus,  she’s become a beacon for all the lost and lonely creatures in the city who just want to “reorient themselves in a confusing, unfamiliar world.”   Of course, some of the others—the Elders, who think that eight thousand years stuck on this small, wet, blue rock are quite enough—are determined to get back to their home universes—even if they have to bring about the End of All Things to do it. Again.

Chasing the Moon is a  hilarious, clever cross between Lovecraft and Douglas Adams, which is a description I never thought I’d use.  It’s a very strange novel, obviously, but in a way that makes that strangeness seem . . . normal.  Mostly.

“Smorgaz, could you excuse us a moment?” she asked.  “I need to talk to Vom.”

“Say no more.  Think I’ll go for a walk.  Anyone want anything while I’m out?”

“Could you bring back a few dozen pizzas?” asked Vom.

“Sure thing. Do you want the pizza delivery guy, too?”

Vom’s stomach growled. Literally, the mouth on his gut grumbled, linking its lips.

“No pizza delivery guy,” said Diana. “Or gals. Or puppies or kittens or anything like that.”

Vom frowned. “Can we at least get sausage on the pizzas?”

And a little later:

“Pork is meat,” he grumbled.

“Puppies are meat,” he said.

“You’re not eating puppies. Not while I’m around.”

“Have you ever eaten a puppy?  They’re delicious.”

“Correct me if I’m wrong, but isn’t everything delicious to you?’

“I don’t care for broccoli,” he replied.

Seriously—if you’re looking for a truly weird and whimsically-written Apocalyptic novel full of  delightfully-written snark and quite a bit of unavoidable existential angst—or if it just sort of shows up on its own—try Chasing the Moon.

Unless you’re into that.

I try not to judge.