Those of you who have been around since last October might remember The Bag:

I love The Bag, because I can schlep around an unholy amount of stuff in it, up to and including my Netbook, a couple of legal pads, two pounds of printed manuscript, and everything the kids claim they’re too tired to carry.  It has side pockets for my Phone and library ID and keys, inner pockets for my wallet, and secured zippered partitions for the stuff I don’t want falling out of it in public.

It’s been my constant, loyal companion for over three years and has never let me down, strayed from my side, or complained about being used as the family oubliette.

Unfortunately, The Bag of Holding, as Watson calls it, isn’t The Indestructible Bag, and has, over the past month, become The Disintegrating Bag.  The leather(ish) is peeling off the straps, the inner pockets have unsewn themselves, and large holes have appeared in the bottom lining, though which a lot of  . . .  stuff . . . has gleefully disappeared.

So yesterday afternoon, Watson and the kids and I went on a quest to find a New Bag.

Watson thinks I need to downsize—the woman carries something the size of a paperback book that’s just big enough to hold her phone, money clip, and keys—but the idea doesn’t sit well with me.  There’s a certain comfort in the slow separation of my shoulder joint under the weight of my ready possessions.

The kids think I need more color in my life, but I tell them that’s what they’re for.  Besides, black—aka, the One True Neutral— is the safest choice for someone who  has a total lack of interest in navigating the many rules, regulations, and risks involved in matching, deliberate non-matching, or flippin’ winter whites versus, I don’t know, autumnal aubergines?  ‘Sides, it matches the tats, yo.*

I wanted one as close to The Bag as I could get.

After searching through piles of the Good, the Bad, and the Oh My God Look It’s An Enormous Chartreuse Jellyfish, I narrowed it down to three possibilities. All were in leather(ish), as the store didn’t carry any in kevlar and I like to pretend that  ripstop nylon isn’t me.**  All were roomy and had a multitude of pocketses.

“That’s not a bag,” said Watson, pointing to the one on the end. “That’s a suitcase.”

“No, it’s . . . okay, yeah, fine.” I said, reluctantly deciding that I didn’t need something big enough for Sunny to climb into—if only because she would.

Of the other two, only one fit comfortably under my arm, its straps settling perfectly into the groove compressed by The Bag.  It’s slightly smaller, but it came with a free mini umbrella—and was 40% off.

I bought it, brought it home, and began the solemn ceremony of Changing Bags, which consists of upending the first one, giving it a couple of sharp shakes, and sorting through the results while the family makes pointed remarks.

At the end of its benevolent reign, The Bag contained (in no specific order):

—Keys
—Library ID
—Phone
—Aquaphor hand ointment
—Hand sanitizer
—A sharpened pencil
—A pair of wrapped chopsticks
—The metal backscratcher mentioned above
—Six pads of a feminine nature (assorted sizes, because female biology is nature’s favorite practical joke)
—Six laminated wooden double-pointed needles (size 2)
—Seven pens, including a green Sharpie, a green highlighter, and one with Get Crap Done printed on the side.
—A refillable scribble book
—A three-year pocket planner
—A one-page bio of Roald Dahl from my short story group, on the other side of which are notes on the third chapter of my new WIP
—An unopened pack of peppermint gum
—A pair of sunglasses, miraculously unscratched***
—My husband’s lighter, last used to light Sunny’s birthday candles—in early April
—A cloth bag of cinnamon pot pourri
—A book of Mark Twain quotes
—A memo pad with my star sign on it
—A CPR Face Shield
—A EMT-issue barf bag in a comforting green
—Leftover nausea meds and motion sickness pills (which explains the bag, sort of)
—A flash drive the size of my pinkie fingernail
—Half an inch of blank 3×5″ cards
—My wallet (contents various)
—My checkbook
—Three Very Important Appointment Cards
—Twenty-one dollars and seventy-six cents (a forgotten Visa gift card from last Christmas, and change)
—A stack of Eagle River brochures (Hodag!)
—A big yellow paperclip
—Three marbles
—A woven nylon rope bracelet in pink camouflage that I suspect Mom dropped in when I wasn’t looking^
—Fourteen crumpled receipts, three used sticky notes, an elderly peppermint, two empty Splenda packets, several No Longer Important Appointment Cards, two crumb-filled ziplocks, two wads of paper with chewed-gum centers, an odd collection of blue metallic paper stars, and a crumpled bookstore bag in which all of this was stuffed before I decided I needed a photo.

The last five items (and half of the eighth) were set aside as I turned my attention to organizing the rest into its new home.

It all fit. Even the umbrella. 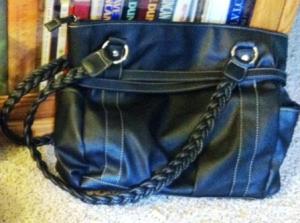 Because I keep getting tassel flashbacks from that Chartreuse Jellyfish.

What’s in your pocketses?

**It clearly is, but not in that particular shade of puce.  No, really.  Hush.

***Okay, yes, I bought them at the same time as the bag, but it still counts as a miracle.  Believe me.

^She bought three, two for the kids and one for herself, but Sunny defied her nature and wanted the purple one and Mom and Jane don’t do pink.  So I guess it’s mine by default . . . or she thought I’d never find it in there.