To replicate this recipe exactly as we made it, you will need:

1  loved-to-pieces and slightly encrusted 1975 edition of The Joy of Cooking, which falls naturally open to the recipe for Basic Pancakes, but also contains a recipe for Caramel Icing

A saucepan that is too small for this recipe

A saucepan twice as large as you think you’ll need

A candy thermometer with a useless clip

An assortment of rubber spatulas

1 ten-year-old who wants to make her own icing in the worst way, and has finally settled on Caramel Icing after being talked down from recipes that would have made Julia Child a bit nervous and Warren Buffett check his grocery budget

A completely cooled 9″ by 13″ vanilla cake, successfully prepared from a respectable mix by the ten-year old with minimal help

1. Combine the brown sugar and cream in the smaller saucepan, despite the suggestion of the ten-year-old that the larger saucepan be used instead.

2. Turn up the heat and have the oven-mitted ten-year-old hold onto the handle of the pan and whisk constantly.

3. Locate the vanilla in the cupboard and a clean set of measuring spoons.

4. Turn around and explain to the ten-year-old exactly what constantly means, as you’re pretty sure the authors of The Joy of Cooking probably didn’t define it as pausing every three seconds to lift the whisk high over the pan and watch the drips.

5. Take over the whisking, as ten-year-olds stir things with their entire bodies and therefore tire fairly quickly.

6. Clap the lid on the saucepan, reduce the heat and cook for three minutes, because the recipe says so.

7. Remove the lid and attach the candy thermometer to the side of the saucepan.  Turn up the heat so the syrup just comes to a boil.

8. Straighten the leaning candy thermometer and eye the rising line, which needs to reach the 240° mark—which you hope is the infinitesimal dot under 250°, or this could get ugly.

9. Straighten the leaning candy thermometer again and go to the fridge for the butter.

10. At the ten-year-old’s warning, run back and hold  the %$#&ing thermometer upright.  As a reward for having the sense to call for adult help instead of grabbing the end of the thermometer herself, allow the ten-year-old to measure out three tablespoons of butter.  No, the butter.  The butter.  What does the box say?  Imperial what?  Right—margarine’s not the same as butter, is it?  Okay, yes, fine, I did say that, but not for this recipe.   Yes, the yellow box that says butter.  Good.  Look at the side of the stick.  We need three tablespoons of that.  Use a knife, please. There you go!

11. Watch the line creep toward 225° . . . and the syrup rise up a lot faster.  Take one precious second to reflect that you may have miscalculated the size of saucepan needed before yanking out the thermometer, lifting the saucepan off the heat, and pouring it into the larger saucepan just in time.

12.  Admit to the ten-year old that she was right, move the new pan to the burner, attach the candy thermometer, and hold onto it, because you’ve been down this road before.

13. Wait until the syrup goes thick and bubbly and dark—which should happen just after you suspect that your whole hand has been encased with a fine crackle glaze by the rising steam—and ask the ten-year old to confirm that the line has reached the probably-240° dot because your contacts may also have acquired a glaze.

14. Remove the candy thermometer and ask the ten-year-old to add the butter, a tablespoon at a time, while you whisk constantly.

15. Ask the ten-year old to add the next two tablespoons a tad more gently, honey, please.

16.  Once the butter has been incorporated, remove the pan from heat, and have the ten-year old measure out and add a teaspoon of vanilla, while you whisk, say it with me, constantly.

17.  Bring the saucepan to the place where you’ve set up the electric handheld mixer, and tell the ten-year old to go to town on low.

19.  When the icing is what you hope the authors of The Joy of Cooking  meant by correct consistency, because they certainly didn’t bother to define that, grab a rubber spatula and empty the saucepan over the prepared cake.

20. Hand the spatula to the ten-year old so she can spread the icing over the cake.   Busy yourself with cleaning up, until you hear cries of frustration.

21. Grab another spatula and help.  Immediately tear up the top of the cake, because you clearly screwed up Step 19.

22.  With delicate motions—and the extensive assistance of your amused MIL—sort of silly-putty the stuff around to cover as much of the cake as possible, while keeping the ten-year old occupied with suggestions about what you can do next time to make the icing a little looser.  Decide to add a little more cream at the end, not beat  it for quite so long, and, if at all possible skip Steps 11 and 12.

23. Hand the cooled saucepan, the beaters, and the rubber spatulas to the ten-year old for taste-testing/consolation/preliminary clean-up.

24. Before washing up, snap off a bit of the icing that made it onto the cake and sample.

25. Decide that the flavor is perfect and that’s what counts—that and the ten-year-old sitting at the kitchen table with a mixing beater stuck in her mouth, paging through The Joy of Cooking for the next thing to try. 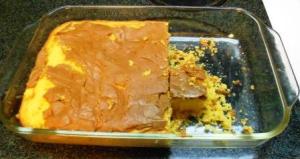