This Saturday, Sunny had her ears pierced.

This came as a great surprise to three-fourths of the family, who thought we were at the Mall on the latest quest to find jeans that will fit Janie, who’s reached that delightful stage where her growth spurts are firing at will from random angles.*

But one of us had different plans.

So while Jane and I made pilgrimages to fitting rooms with offerings of assorted denims, Sunny and my husband were left to their own devices.

My husband: Where are you?

Me: Trying on Levi jeans now. They’re NOT WORKING.

MH: We lost you! Sunny and I are just outside the store at Exotic Imports.

Me: Ah. We’re in Penney’s, still. No luck yet. Jane’s getting dressed.

MH: Maybe we should try Deb?

Me: Maybe. It’s length, not width, though. She’s a 6 junior in Levi, but they’re a foot too long.

Me: Ha. No. Heading for Arizona territory. One more try here, and we’ll Deb.

About twenty minutes and a three-foot stack of sizes, cuts, and colors later:

Me: VICTORY! Found her size, they’re on sale, and I don’t have to hem ’em!***And we’re still speaking to each other.

MH: Good. Sunny is getting her ears pierced.

Me: We’re in the check-out line now. How’s it going?

Apparently, Sunny had dragged her father to the earring place, asked if she could have her ears pierced for an early birthday present, and hopped up on the chair.  She was perfectly fine until it was over, and her nervous system realized what had happened, but her tears had dried by the time Jane and I arrived.

Those of you who weren’t around when Jane had her ears done might not understand my confusion at the sheer lack of psychological trauma, my wonder that it worked on the first try, and my gratitude that I hadn’t had a chance to screw it up.

But there wasn’t, it had, and I hadn’t.  And Sunny is ticked to death with them: 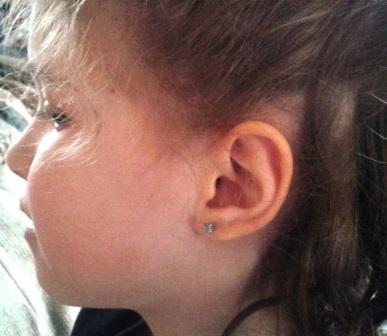 My kid with the focus issues even has us on a rotating schedule to help her with the ear solution stuff.^ Turns out, she can focus just fine when she truly wants something.

I only wish she wanted good grades that much . . . and a puppy a lot less.

*At least half of her body has decided to forge ahead into teenagerhood, but no one alerted the waistline fairy. Add in the proprietary, distinctive, and somewhat inconsistent sizing systems of every single brand of women’s clothing, and things get even more frustrating.

**I adjusted for misspellings (mine, not his, stupid tiny keypad), punctuation (his, not mine, thank you) and family abbreviations.

***Arizona jeans are as close to perfect as we can get for this kid, until that fairy shows up—but that’s what belts are for.  The sizes go from 0-19 in short, average, and long, they come in bootcut and skinny, and the prices are pretty good for clothing destined to be replaced every few months.  So we can safely grant brand loyalty, supposing they won’t be discontinued the moment I hit the publish button on this post.

^After several attempts resulted in dry cotton balls surrounded by a moat of benzalkonium chloride—the bottle’s too big for her.