Jane has a school project based on The House of Dies Drear, in which the young characters find a pre-Civil War chest in the attic of the house they’ve just moved into—or so I’m told, as I haven’t read it, myself.

Her mission is to build a chest and fill it with five handmade things that one might find in a pre-Civil War chest, accompanied by annotated cards.

The students brainstormed lists of stuff and the teacher chose five things for them, which is good, because my daughter’s ambition knows no bounds and we only have until this Friday.

She spent Saturday painting a landscape in the style of an 19th Century artist*. molding an inkwell out of black, bakeable clay,** dipping a feather in black paint for a quill, and sewing a pincushion out of eighty-eight cents of upholstery fabric to hold my one darning needle, which is attached by black thread to a wooden spool that cost two bucks.

That left Sunday for the last thing on the list.

At this point, I was hoping we could just buy a couple of beeswax tapers made by someone else’s hands and call it a day, because I know for an almost very nearly  fact that people did buy candles in 1865.  But Jane was adamant.

An adamant Jane is an immoveable object, and a Jane who is adamant about doing her homework correctly can force me to do almost anything.

So we bought some wick and granulated wax and found a way to melt it without ruining my only double-boiler:

I also rigged up a handy-dandy cooling rack, just like the ones they had in 1865, minus the pots, the barbecue tongs, the phone books, the Norton’s Anthology, and the American Collegiate Dictionary . . . and the TV listings doing their valiant best to keep the wax off my stove top.

Necessity, ladies and gentlemen, is a mother.

The process was surprisingly easy, once the wax melted.

Or easy for me, anyway, because I wasn’t allowed to help, other than keeping the water and wax levels up, occasionally readjusting the rack, and telling her to be careful at regular intervals.

Until, after about an hour and a half, she’d created these: 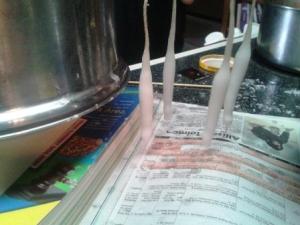 But she’s proud of herself, for good reason.

And if they look a little more like white carrots than tapers, who cares?

Now, all we have to do is make an authentic looking chest out of cardboard***—and by we, I mean Jane and my husband, ’cause I’m too busy prying a fine layer of wax from every surface of the kitchen with my plastic dish scraper, may its inventor be ever blessed.

And Jane has to write up the cards for each item.

She wants to use the quill.

Stay tuned for a report of Sunny’s Charlotte’s Web diorama, for which she’s chosen the scene where Wilbur is told he’s going to be slaughtered and he runs around screaming, “I don’t want to die!”

Because she wants HER shoebox creation to have moving parts.

If she asks me to crochet “Humble” into a embroidery thread spiderweb, I’m heading for the hills.

*In acrylics, not oils, because I’m neither rich nor insane—despite the fact that I just every single one of you snickering just now—and I knew going in who would be doing the clean-up.

**Anyone who remembers the footnoted sugar paste – food coloring debacle from a month ago can rest assured that I learned my lesson and bought pre-colored Sculpey.

***The rules say that each dimension of this thing needs to be between one foot and one yard, which cleverly means that we can’t go out and get a bankers box at Office Max, because those are only ten-inches deep, $#!% it.