I have an interview today.  Not for a new job, exactly, but for a position in a different department of the library.

There’s no real reason to think I’ll do badly, but I’m still stressing about it, as part of my default setting.

As I told a friend yesterday,  I can’t decide whether it’s good or bad that my old boss will be interviewing me and  whether she’ll think it’s good that I have seventeen years of professional experience under my hat or bad that I’m not young, perky, and  able to create a LibGuide without hitting the help button every three minutes.

Before I could get into the spirit of the thing and spiral into describing every single thing I’ll do to ruin my chances during the interview, she reminded me that I’d given up self-hatred for Lent.*

Coincidentally,** Jane had a Self-Esteem assignment due yesterday.

Naturally, she ignored it until Sunday afternoon, because the last thing a twelve-year old wants to do is stand up in front of her peer group and do a five-minute presentation on why she’s an amazing human being, even if the instructions say she’s supposed to introduce a representation of herself to make it marginally less embarrassing.

Because she’s pretty sure someone (everyone) will make sure to explain in great detail why she’s wrong.

Man, we start downplaying our personal value and internalizing worthlessness early, don’t we?

I’ve internalized several decades of the stuff at this point.

Which is why I decided to prepare for my interview by doing Jane’s assignment, too, with a couple of modifications.*** Because if I’m going to sit in front of a fairly intimidating former supervisor—who knows aaaaall of my workpace quirks and foibles—and explain why I’m the best choice for this position, I’m going to need all the awesome I can feel.

And let me tell you, this exercise was extremely difficult.

I knew that I didn’t have to share any of my statements—I had a filler post all ready—and I still had problems writing things like “why I’m a good friend”.   I had a hell of a time even typing that previous sentence without cringing or adding modifiers like “sometimes”, “almost”, or “occasionally”. Or taking our the word “good” altogether.

Holy flippin’ cow, why is it so hard to let ourselves be awesome?

Why can’t we just be awesome for a single moment without making a joke out of it, or ducking imaginary rotten tomatoes, or tossing them at ourselves to save the trolls the trouble?

We don’t even have to be awesome all the time—just for a moment.  And then maybe we could be awesome again for one more moment. And then another one.

Until we’ve built up the ability to be awesome for a whole series of moments—like self-worth Kegels or something.

You know what I mean.

Let’s all just be awesome in the moment and fill in the damn answers.

You must include a physical representation of yourself: a large picture, life-sized cutout, 3D head, recreation of you, mannequin dressed and you, or anything that can be YOU! 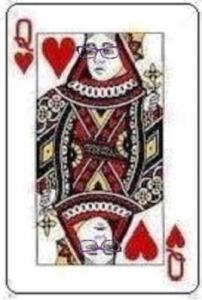 Note the Purple Glasses of Awesome.

Topics you should cover:

I can belly dance.  My Camel Walk and Shimmy are especially awesome.

• My most amazing social quality:

I can strike up conversations with almost anyone.

Making up lyrics to other people’s songs.

I listen and I can keep a secret.

• one awesome thing about my family:

We sing made-up operas together in the car.

Spend the whole summer at the Shakespeare Festival in Stratford, Ontario

When someone told me she’d stayed up until 4am to finish a story I’d written.

But only because I’m always proud of my kids—that’s a constant, not a moment.

I have no written test anxiety whatsoever.

Laughing with my kids.

• My most amazing accomplishment

I’d say “childbirth”, but I also once beat a Marine in a fencing match.

Used to make stuffed animals for extra cash in grad school.  Made a llama once, with eyelashes and everything.

I’m the only one of me there will ever be.

Writing for a living.

Feel free to put yours in the comments, if you want.

**Or not, depending on your views toward the mysterious ways the deity of your choice moves or the inevitable way the random generator of the universe sometimes throws a double.

***I changed some of the questions because I’m already doing what I’m doing after high school, and so on.  You’re supposed to supply four objects that say something about you, but I’m substituting four years worth of blog entries. And, as mentioned above, you’re supposed to use the physical representation of yourself as the awesome “person” you’re introducing.  It is easier that way . . . but maybe it shouldn’t be. So I ignored that bit, too.