This meant that we had to bake something in the middle of one the busier weeks we’ve had lately, because one of the downsides to sending your kids to a school with a 12:1 student teacher ratio is that everyone will quickly figure out it was you who chucked a handful of  Oreos onto a paper plate and set it down in the middle of all the artesian breads and cakes and homemade chocolate croissants, even if you attempt to file the serial numbers off the Oreos.

Luckily, Janie has a favorite cookie recipe and a deep, abiding love for my Kitchen Aid mixer.  In the interests of time, I manage to talk her into making one pan of bars, so I wouldn’t have to shovel cookie sheets in and out of an oven all evening.

So we rushed home Wednesday and starting pulling things out of cupboards and the fridge.

The standard recipe, as made by people who are not us, calls for the following ingredients: 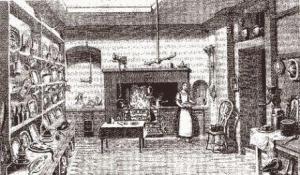 1. Tell your eleven-year-old to measure out the flour, which she will do until she runs out a cup shy of goal.  Decide to use bread flour for the rest and ignore all potential over-glutening problems, because cooking is an adventure.  Add the salt and baking soda and mix gently.

2. Hear your MIL call from the living room that she made chocolate chip-walnut cookies that afternoon because no one told her we were going to bake that night—but you’re welcome to use them for the sale since she probably used up most of the flour.  Look at the calendar, which has BAKE BARS FOR BAKE SALE on it in red marker, and sigh.  Look down at the bowl of flour, salt, and baking soda that you can’t put back in their respective containers and listen to your indignant eleven-year old list off the number of her classmates who will die if they even think about eating walnuts and she wants to bake something herself and you told her the other day she was a good cook—did you lie?

4. Ask your eleven-year-old to cut the two sticks of margarine into the appropriate number of tablespoons to sneak in a little practical math practice. Discover that there isn’t any margarine to be found in fridge or freezer, but there are two pounds of Real Butter, because your sister-in-law has a Thing about it. Think about  having your eleven-year-old smoosh all the margarine bits back together into a stick so you can switch to butter without a lecture from your MIL about wasting food (or food-like products),  but suddenly remember that one Good Eats episode where Alton Brown used butter and shortening in biscuits—illustrated by punching nun puppets, because Mr. Brown is the King of Effective Mnemonics—and borrow a half a stick of Real Butter from your sister-in-law’s stash, even though you’re fully aware that biscuits are not cookie bars in the country you live in and shortening is not margarine. Maybe? Pledge to find out later and drop it all in the mixing bowl.

5. Let your eleven-year-old measure out the brown sugar, because watching it slide into the mixing bowl without losing its shape is the fun part. Measure out the granulated sugar yourself to save time, but dump it in the flour bowl instead of the mixing bowl because that seems to be the day we’re having.

6. Scoop out the granulated sugar and some inadvertent flour into the mixing bowl, while ignoring the taunts of your ungrateful progeny.  Screw the bowl firmly onto the base of your mixer—remember last time you forgot?  Right—and begin searching for the appropriate mixing paddle attachment, in the traditional way of your people. Reluctantly decide that the addition of the bread flour probably doesn’t mean you can use the bread hook.  Find the paddle attachment in the dish drainer, where it’s been waiting patiently since the last time you used it, and attach it.

7. Cream the margeributter (buttgerine?) and the sugar on low/medium speed. Use a rubber spatula to make sure that there are no rogue lumps in there—turn off the mixer first.

8. Allow your eleven-year-old to crack one egg at a time into the mixing bowl—turn off the mixer first—incorporating the first one into the sugar mixture on low speed before adding the second.

9. Go to add the vanilla, which you forgot to add in step six.  Discover that you don’t have any vanilla  because your MIL baked that afternoon, but you do have an elderly bottle of maple flavoring you must have bought for some recipe, possibly before your six (and three-fourths, Mommy!)-year old was born. Dump in two teaspoons and hope for the best.

10. Ask your eleven-year-old to add the flour a little at a time. Leap across the kitchen to keep her from tilting the whole bowl of flour into the mixing bowl and turn off the mixer.  Pick up the fourth cup measure, hand it to her, explain the process carefully and clearly, and watch her like a hawk as she actually does add the flour a little at a time without covering the kitchen in a fine layer of the stuff.  Bask in parental pride.

11. Measure out the butterscotch and chocolate chips into a bowl yourself because you weren’t born yesterday and the moment you opened the bags, an extra child materialized between you and the counter and four small hands got the grabbies.  Allow the pilfering of three chips each and defend the rest with your rubber spatula as you carry the bowl to the mixer.  Dump in the chips without turning the mixer off first because you want to be done.

12.  Belatedly heat the oven to 375°F, or whatever your oven says when what it really means 375°F.  Take out your jelly roll pan and have your eleven-year-old use nonstick spray on it with great enthusiasm and questionable aim.

12. Begin spreading the dough and realize that the pan is too big for a single recipe.  Debate moving it into a glass pan,which will be too small. Shrug and carry on.

14. In seventeen-ish minutes, pull the pan out of the oven.  Turn off the oven.  Blink at the pan for a while.  It smells good, but looks a bit . . . beige, except where it kind of scudded into the empty part of the pan. Turn off the oven—remember last time you forgot?  Right.

15. Take your pizza cutter and slice off the overbrowned scudded part.  Sample.  Blink.  Offer some to your eleven-year old.  Watch her blink, then smile.

16.  After the pan is cool, cut the rest into bars and pack them up in foil-covered pie plates, while arguing with your eleven-year-old about whether you’ve made brownies, blondies, or beigies.

17. Decide to name them ButterMaple bars and vow to try again with perhaps a little less bread flour and younger maple flavoring.

18. Write it all down before it gets away.