Poets love birds, and no wonder.

The power and freedom of flight mirrors the imagination and evokes wonder or jealousy or both; the songs are joyous or lonely or spooky as all heck*; they’re infinitely metaphorical; the sheer diversity of the Aves class guarantees something for every sentiment . . . and, you know, most of ‘em are pretty.

Birds, in a word, are versatile.  And they rhyme a treat, too.

I have many bird poems in my overstuffed clipping file, but pigeons** have been on my mind lately–don’t know why—and for some reason, people tend not to write odes to what Sir Terry Pratchett once called “effluvia with wings.”

In fact, I found only one pigeon poem in the pile—you can always count on Carl Sandburg to find the nobility in a citified sky rat:

The flutter of blue pigeon’s wings
Under a river bridge
Hunting a clean dry arch,
A corner for a sleep—
This flutters here in a woman’s hand.

Pigeon friend of mine,
Fly on, sing on.

This is a good poem—Carl Sandburg needs his own post—but it looked lonely on its own.  So I went hunting and found the coolest poetry promotion ever.

In 2008, The Red Room Company—a Sydney-based, non-profit organization that promotes Australian poets and poetry***—asked eight poets to create original bird- or flight-related poems.  Each poem was attached to a racing pigeon, and the company invited the public to guess which poem—or pigeon, I suppose—would make it back to the loft in the least amount of time. Hundreds of people joined in the fun and the race was considered a great success.^

And the poems were fantastic.  They’re listed here,^ with their respective pigeons.

Poetically enough, “Velocity” by Ivy Ireland (carried by Jimbala) won, but I think I’d have bet on “A word from the feral pigeon” by Andy Quan, (carried by This Is Not Art Smokey).  It’s as defiant and unapologetic and funky as the title suggests.

So that’s pigeons taken care of, but there were three other bird related poems that I set aside, just in case my hunt was unsuccessful.  I’m still waiting for permission for one of them, but I’m going to assume the other two poets won’t mind.

Black shadows fall
From the lindens tall,
That lift aloft their massive wall
Against the southern sky;
And from the realms
Of the shadowy elms
A tide-like darkness overwhelms
The fields that round us lie.
But the night is fair,
And everywhere
A warm, soft vapor fills the air, 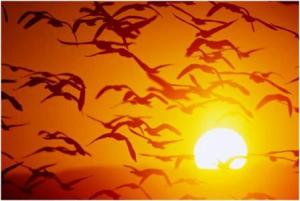 .And distant sounds seem near,
And above, in the light
Of the star-lit night,
Swift birds of passage wing their flight
Through the dewy atmosphere.
I hear the beat
Of their pinions fleet,
As from the land of snow and sleet
They seek a southern lea.
I hear the cry
Of their voices high
Falling dreamily through the sky,
But their forms I cannot see.
O, say not so!
Those sounds that flow
In murmurs of delight and woe
Come not from wings of birds.
They are the throngs
Of the poet’s songs,
Murmurs of pleasures, and pains, and wrongs,
The sound of winged words.
This is the cry
Of souls, that high
On toiling, beating pinions, fly,
Seeking a warmer clime,
From their distant flight
Through realms of light
It falls into our world of night,
With the murmuring sound of rhyme.

I don’t know if this poem is the reason a flock of starlings is a murmuration^^^ or if Longfellow even had starlings in mind when he wrote it—but I like to think so.  And if someone can find a more beautiful description of what writing poetry must be like, drop me a line, because I want to hear it.

Anyone who’s gone through the US public school system has read this one at least once in their lives, even if they don’t remember it—and those who do usually remember the raw worm bit best.  But I like it very much—I can see the bird hopping around—and that’s the single most important thing in poetry.  Right?

A Bird came down the Walk 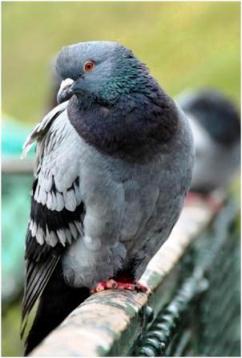 A Bird came down the Walk –
He did not know I saw –
He bit an Angleworm in halves
And ate the fellow, raw,

He glanced with rapid eyes
That hurried all abroad –
They looked like frightened Beads, I thought –
He stirred his Velvet Head

Like one in danger, Cautious,
I offered him a Crumb
And he unrolled his feathers
And rowed him softer home –

Than Oars divide the Ocean,
Too silver for a seam –
Or Butterflies, off Banks of Noon
Leap, plashless as they swim.

***The existence of which is excellent all by itself.  Why don’t we have more of these all over the world?

^Though the camera pigeon disappeared during the race and is presumed dead.  Personally, I like to think Cam was waylaid by an enterprising tabloid editor and has built a nice career for himself as an aerial paparazzi.  Notice how some of the footage of the recent(ish) Royal Wedding looks like it was shot from the tops of those trees lining the Cathedral aisles?

^^ http://pigeonpoetry.com, if you prefer to cut and paste.

^^^ We interrupt this poetry discussion to give you a performance poem by experts in the field, pun intended: