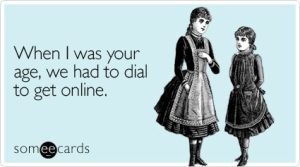 As of yesterday, this blog is four years old.

That’s 1,219 posts, including this one, many of which involve poetry, science, kids, rants, superheroes, music, food, and my apparent inability to reliably chew gum and walk at the same time.  Or invent an original metaphor.

Thank you all for reading, commenting, snickering, arguing, sympathizing, and sending me weird stuff for Thursdays, anyway.

Tomorrow, I will be forty-four years old.

That’s 16,060 days, including this one, many of which included Learning Experiences™ of various types.*

Thank you all for humoring me while I whined about the majority of them.

To celebrate both milestones, I’m taking the week off from posting. **  A gift, from me to you.

I’m hoping to make some leeway on a couple of projects and also take a little time to examine my priorities and shuffle ’em around. 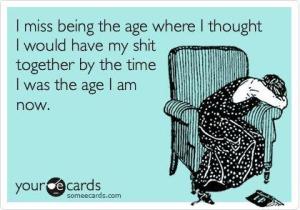 * If I collect enough of those, I may turn into a Real Adult someday. There’s an incentive . . .

**I will also be celebrating at the lunch buffet at my favorite Indian restaurant until  my husband has to lead me to the car and put an extension on the seat belt.  Because Real Adults set obtainable goals.

***I will also be visiting the dentist, which I’ve been told Real Adults do far more frequently than I.  The way I figure it, I made the appointment on my own behalf, even though my teeth and gums don’t hurt, which is a huge step in my maturation process, right there.  So nyah. 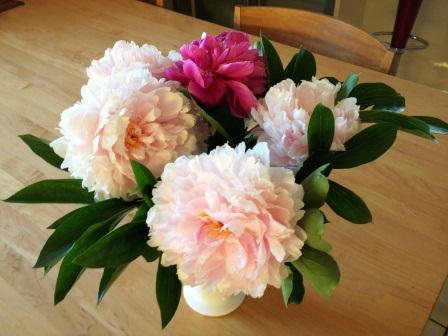 It’s been a pretty good birthday so far.

The day started with birthday hugs from two sleepy kids, a beautiful hand-picked bouquet from my dear friend firstmausi—in image form, since her garden is roughly 4,500 miles from my house—and several birthday e-mails and Facebook comments that were remarkably light on the elder-abuse.

Breakfast brought me birthday cards, gift certificates,* the desk lamp I asked for,** and handmade soap my husband found on his last trip to Chicago.  And more hugs, of course.

Before I clocked in this morning, I printed and mailed my Pigeons stuff to The Midwest Writers Workshop,*** and figured out how to print one of Sunny’s stories into a little booklet without too much trouble.

Hitting a deadline and conquering MS Word?  Not a bad way to celebrate a birthday.

Aaaaand I was challenged to a Poem-Off by none other than indy clause herself, who thinks I should start posting verses from the Twenty-First Century—late Twentieth, tops.  I’m treating it as a special birthday gift.

I mean, knowing someone cares enough to kvetch about my poetry posts?  Priceless.

Can’t wait to see what the rest of the day brings—besides patrons, since I’m working the evening shift tonight.

And I can’t wait to see what the next year brings, too.

It’s also the week of my blogoversary:  Three years and 961 posts, including this one.

I was even freshly pressed last month—and though my stats have settled into something a bit less mind-blowing, the follower number refuses to drop, even though I’m pretty sure at least half of  y’all are actually reading my posts.

Some of you have even been kind enough to hit the like button on occasion and maybe comment or drop me an e-mail—or send me things for Random Thursday.

Thank you all so much!

*Which I may use to buy a new Bag of All Holding, since my current one is finally starting to wear at the straps.

**I recently moved my writing space form the dining room table back to the  rolltop desk in my bedroom.  It’s quieter and a tad more organized, but there’s no overhead light back there, and we old people are highly suspicious of staring at lit pixels in dim light.  Plus, I can’t see the keyboard.

***Where I’ll be rooming with the amazing Sherry Stanfa-Stanley, who knows how to make birthdays count. 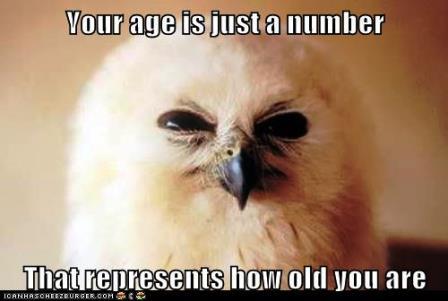 I had a good birthday.

After lunch—technically a Father’s Day lunch for my husband at his favorite Mexican restaurant—Janie, Watson and I went shoe shopping.  I adopted three pairs:  a pewter pair that almost makes up for the deplorable fact that Rieker stopped making those red  and silver suede ones just when I need replacements, a black pair that Rieker can’t stop making because they are the shoe, and a pair that hugs my feet like lovely woven gloves.**

The only bad part is that I have to inter my old, worn-loved-and-abused-to-destruction favorites,*** but all birthdays have a touch of melancholy, right?

We spent the next hour looking at every single item in the accessory shop next door and saying no to Janie, which is good exercise and keeps me sharp for the pseudo-negotiation of bigger things she won’t be getting until she achieves financial and geographical independence.   But I did spring for a set or two of earrings–on sale–and two hairbows for Sunny.^

Because every birthday should be about sharing stuff, even if that stuff is made of tiny earrings shaped like fast food.  Right?

Tired and happy, we returned home and had lemonade and pie.  Okay, the kids had lemonade in front of the tube, my husband had iced tea, Watson went downstairs to take care of Jada Mae Swissie Dog and I hid in the kitchen with my laptop and had pie—chocolate truffle pie—while thanking everyone who sent me birthday wishes.

So, so worth the slightly sticky keyboard.  Because birthdays should be about friends and risking chocolate-coated, white-hot sugar death.  Right?

It was a good, long, prodigious nap.  There may have been dreams of swordfights with garlic breadsticks.  This isn’t as weird as it sounds—partly because it’s my subconscious, and garlic breadstick swordfights aren’t nearly as odd as it gets in there—and mostly because when I woke up, the house smelled of roasted garlic, meatballs, pasta sauce, and toasted bread—Janie and Watson made me dinner for my birthday.  It was amazing, and ended as all fabulous meals should,  with a slab of my MIL’s famous Pumpkin Cake with Cream Cheese Frosting^^ and a quick change into elastic-waisted pants.

And then we had presents. Because birthdays should be—well, you know.

My kids gave me a hair dryer, which is exactly what I’d asked for, since I’ve been playing Russian Roulette with my old one for two weeks—sometimes it works, sometimes it doesn’t, sometimes it waits until my hair is half-dry and at even funnier angles than usual. This new one is bright, shiny, and aggressively magenta—if it were  shoes, it would be clogs (see**)—but it works, it has a retractable cord,  and it’s quiet.  I spent some quality time with it this morning and I think we’ll get along just fine.

My husband gave me Sherlock Holmes: A Game of Shadows on DVD, which I’m still loudly kicking myself for missing in the theater every time I’m reminded of it.^^^  He apparently bought it the day it  came out in an effort to stop the kicking, or at least the loud, and has been living in fear that I’d buy it for myself, which I’ve only done . . . a couple times, and usually, in my defense, books.   So I want at least partial credit for my restraint.°

But the Gift of the Day award—don’t tell the kids—goes to my MIL, who gave me something I’d stared at for a solid twenty minutes at the Art Fair last month before tearing myself away with thoughts of my Discover Card bill: 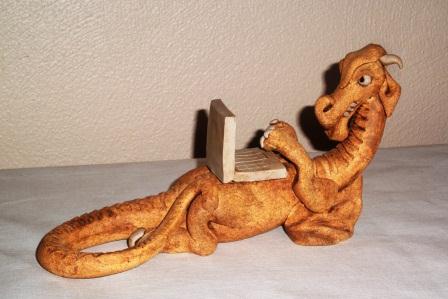 His name is Blaug.  Isn’t he brilliant?

It was a very good birthday—because birthdays should be shared with the people who know you best and love you anyway.  Right?

*Thanks so very much,  Siobhan.  You’ll be delighted to know that I’ve marked your birthday on my calendar, too.  In red.

**I’m so disappointed that clogs and I don’t get along.  I hated the pointy shoe trend, because I do not have naturally streamlined toes and do not feel the need to cripple myself for fashion, but the overly-rounded backlash currently in effect makes me feel like I’m a clown dressing as a duck in an effort to look like a clown duck in my early hipster twenties, which wouldn’t have been a good look for me when I was in my twenties and is exponentially bad now.  Especially in that pair that looked like someone had cracked a blood-red pearlized bowling ball in half and shellacked it.  There are some shoes so fundamentally ugly, you have to try them on, just once.

^Who told me I was the Best Mom Ever and  promptly clipped them to the head of her stuffed duck, whom she had dressed in a play jumper originally owned by an entirely different species of doll.  In retrospect, the day had an odd, secondary duck theme to it . . .

^^I still can’t believe I rated this cake.  I’m sure she also made it for my husband, but I don’t care because it’s that good.

^^^According to certain members of my family who have started to join in chorus as I whine, I’m reminded of this a lot.

° While duly giving credit for the distractions offered by television—more specifically, the second season of BBC Sherlock (nabbed it) and the fourth season of Leverage (pre-ordered).  But it could have easily gone the other way. 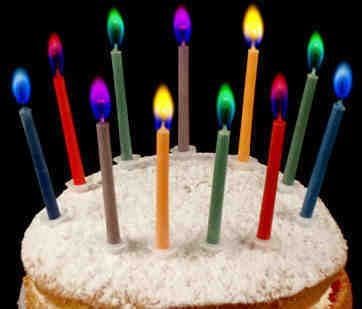 Halfway to middle age . . . Hey, being a late bloomer has its perks.

Not only am I one year older than this post, it’s two days past my first blogoversary.

It’s been an interesting year.  Not in a “may you live in interesting times” oddly polite ancient curse way either, but  in a “how cool is THAT!” way.

I’ve met an astonishing number of Very Amazing and Brilliant People, some of whom have become good friends—with me.  Thank you all for your support, encouragement, music, sympathy, comments, videos, righteous indignation, stories, and humor.

I’ve not only learned how to shoot an automatic (badly) and pick locks (better) and drive  police car (aced it), I’ve had more than my fair share of Learning Experiences™ and have lived to kvetch about it.

My children have survived another year, both physically and emotionally.

And I’ve managed to photograph some seriously sexy potatoes along the way.