Two of you sent me two individual  Straight, No Chaser vids, and I couldn’t chose.  So I didn’t.

FIVE of you sent me that Kmart commercial . . . but I have the feeling most of you have already seen it.  More than once.

The Fairly Inclusive If Slightly Commercial s Holiday Can Can

I have two daughters who so far have only had sixteen birthdays and fourteen Christmases between them, and have somehow amassed twenty-seven Barbies, Kens, and assorted Mattel® Friends, plus five Monster High dolls and several bushel baskets worth of related outfits and accessories.

That last bit is something of a joke, as my youngest does not suffer a doll in her proximity to be clothed for more than thirty seconds.  In fact, the dolls themselves haven’t been touched in the last year, except to be grabbed from the storage bin, shoved headfirst into an improbable outfit for reasons unknown and then field-stripped in thirty seconds, before being dropped onto the playroom carpet in flagrante deplastico.

However, about a month ago,we donated—with the children’s blessing—the entire nudist colony and their combined untouched wardrobes to Goodwill, where it is hoped they will be adopted and loved and clothed and all that jazz.

But when Watson sent me a link to Margaux Lange’s website, I thought, “Rats, missed opportunity.”

Because Ms. Lange has found a unique way to repurpose Ms. Roberts and her friends.

Or parts of them, anyway. 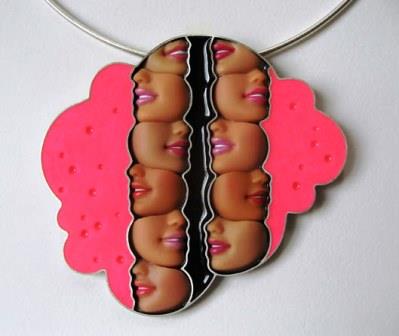 She’s even found a way to make something pretty out of all those horrible Barbie heels that like to gather in the dark corners and eat their mates before throwing themselves under your feet pointy side up, like tiny plastic caltrops. 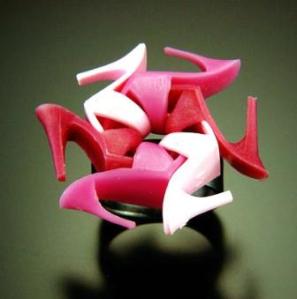 But the earrings are my favorites:

The kicker for me?  The crow took his lid with him. 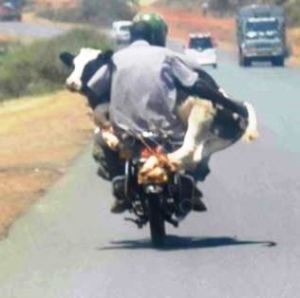 It’s not holiday related, no.
But it is udderly moooooooving.

Twelve Days of a Little Bit of Everything

For those of you who didn’t tune in yesterday, the
Second Annual Chrishanukwanzmadanfestivus Poetry Contest is on!

There could be a $25 Powell’s Gift Card in it for you, so why not give it a try?

Here’s some inspirational music to help get you in the mood:

And I’m not letting these go:

You know that now that I know you can get these at Jungle Jim’s,* I’ll be expecting regular Care Packages, right?

It was a good day for everyone.  Some of the highlights:

Pure Awesomesocks from Santa, who also went a little crazy at the accessory store—if it’s meant to attach to hair, it was in the kids’ stockings.

Watson made the kids hats that go with our family’s favorite movie** and one of our favorite in-jokes–with no written pattern: 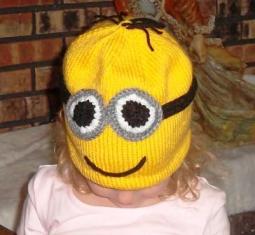 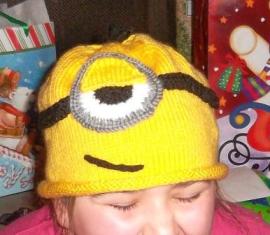 She also gave me my new favorite tee-shirt:

Because I’m a big ol’ nerd—this can’t be news—who firmly believes that what The Whedon takes away, The Whedon can bloody well give back.

Since the Christmas turkey roast was put in the crockpot at 10 this morning with four heads of garlic, I spent the afternoon playing computer games with Jane, reading a few of the books given to me by friends and family,  and, as a personal challenge, decorating cookies.  These cookies:

The trick with  is to make the icing just the right consistency—but by the time I mastered the technique, I’d run out.  It was tough, but I found the experience humerus . . .

I hope you all had a great Christmas—or a rather nice Tuesday—and that your evening is filled with the equivalent of the Doctor Who Christmas Special and just this side of too many strange and tasty cookies.

*If you’re anywhere near Cincinnati, go visit Jungle Jim’s—it’s an experience, right down to the bathrooms. And if you forget the name before you can, just google “Weird Grocery stores in Cincinnati,” and it’ll pop right up.  There might also be a video.

**Collectively, I mean.  Our individual tastes differ.  A lot. 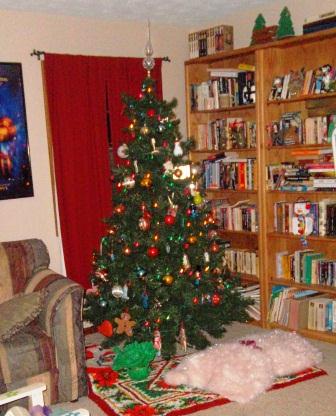 —a Snowman made out of a paving brick that weighs more than Sunny.

—A half-shredded, tissue-wrapped, school-made gift left to the mercy of the cat

—half a bolt of pink-and-silver fake fur tied with a sequinned ribbon, from my friend Grace to the kids

—The wooden nut basket with two trees on it that we tore the house apart looking for until it showed up in the photograph and someone elbowed someone else, pointed,  and said, “Oh, for $%#&’s sake.”

—a gingerbread man ornament with feline teeth marks on one leg

—A small egg-nog stain on a hand-hooked Christmas rug from my MIL’s side of the family (don’t tell her, please)

—The TV remote, because we can’t find it and we know it’s in there somewhere.

—Three copies of The  Best Christmas Pageant Ever

—The cat because we can’t find him, either, but odds are he’s doing something unspeakable behind the tree, possibly to the remote

Pry the kids away from the tv so they can finish the homework they’ve been avoiding for two days and do a little quick editing of Pigeon between admiring wobbly rows of 3’s and 5’s and offering ironic assistance in the correct spelling of ‘dictionary’.

Do an emergency run for dog food and diet Pepsi—this is survival, people.

Make cupcakes and earn one brownie point for for making one’s own self-rising flour—thus making up for the points lost in not reading the recipe all the way through in the first place.

Spend the rest of the day having fun, because it’s crazy sunny today:

Have a great Labor Day—or a very good Monday!

However, whatever, whomever you celebrate (or not) this time of year,

I wish you a Happy Merry or  a Merry Happy time doing so.