The first green thing that worried me this week is in the hallway, across from the kids’ room.  I saw it, stuck to the wall and glowing LED-ly in the dark, when I came home from work Monday night: 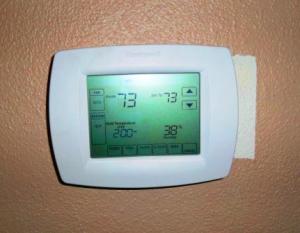 It’s the control pad for our new heating/AC system. I don’t have a clue how to operate it.   My husband, aka Captain Thermostat, read the manual and keeps ‘forgetting’ to tell me where he’s keeping it.

I’m thinking it might be easier to knit myself a sweater and less stressful to become a seasonal nudist than figure out this thing.  It’s got a humidity control, for pizza’s sake.*

I also don’t know how we’re going to match the paint to cover that white patch where the old thermostat was—this summer, we threw out all the  old, solidified paint left by the previous owners.  Guess I’ll have to chip a bit off the wall and see if they can match it at the store.

I’d rather repaint the walls something less . . . brown** . . . but we blew all our money on a furnace that wasn’t trying to kill us.

And I really can’t complain about that.

Yesterday, I once again found myself encountering something that I hoped belonged to one of my children and wasn’t going to attack,  infect, or impregnate the family’s nasal passages as we slept:

“Sunny?  What is that thing on your bed?”

“Bubbleguppy, Mommy.  Like on TV.  He used to be an ocapuss, but now he’s my own bubbleguppy.”

I did what I usually do when Sunny confuses me—I went to find Janie, whose nose was stuck in my Netbook.   “Honey?  Is a Bubbleguppy a real thing?”

She nodded without looking up from her astrophysics lesson.***  “They have games on the Nick Jr. website.” 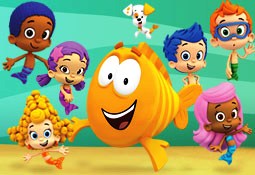 I’ll wait a moment for you to compare the images.

So I called Sunny again.  “Honey?  Why is this a Bubbleguppy?” 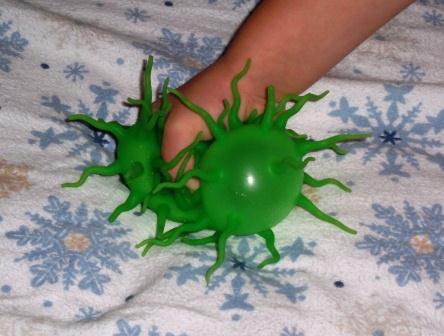 At Thanksgiving, my mother brought us a beautiful planter full of herbs:

She really should have known better.

I exude a natural pheromone that causes all plants but clover and crabgrass to choke up and wither.  I once kept a feeder goldfish alive in a plastic mustard jar  for four and a half years in my college dorm room, but I am Death to houseplants.

And they know it.

Case in point:  a college friend once gave me a cutting from her ginormous night-blooming cereus—a type of cactus that produces one or two flowers a year—that had grown all over her dorm room in two weeks.  I planted it in the right soil, I gave it the right amount of water, and it remained a green leaf in a pot for an entire semester, except for the last week, when it was a brown leaf in a pot.

I brought it home to Mom at Christmas break, thinking she could use the pot for something, and forgot about it until I came home at Spring break— to find my leaf had exploded joyfully all over the broad, shallow dormer where Mom keeps her plants.  It filled the entire picture window.

“Yes,” she said, pointing to the ceiling.  “And the damn thing’s burrowed into the plaster!”

Not only that, but it produces five or six blossoms three or four times a year.  It was blooming when I arrived home, though one flower dropped off when I looked at it.^

Obviously, Mom neglected to pass along her green thumbs.  Instead, I have the thumbs of a cereal killer.

I mentioned this when she handed me the planter full of sage, rosemary, thyme, marjoram, and mint.^^  “You know you’ve just doomed these poor things to a short, unhappy life.”

See?  She willingly and with prior knowledge handed ’em over.  That’s accessory to herbicide, that is.

But I’m not cruel—I gave the planter to my MIL, and so far, so good.  Except for that yellow patch on one side.

Janie came into the kitchen last week, dropped something and said, “Oh, for pizza’s sake!”
“Hey,” I said.  “I like that.”
She shrugged and said, “My friend Pete asked me to stop saying everything was for him.  The other boys were getting the wrong idea.”

**My husband pointed out that it’s the same exact color as Talenti Belgian Milk Chocolate ice cream.    I replied that Talenti was heaven in a bowl, not heaven smeared on  a wall.  The conversation kind of veered off course at that point . . .

***Seriously—coolmath.com. Janie’s learning all about percentages and fractions and moving in n-space and how to kick Santa down a chimney using vectors and trajectories.  I highly recommend it.

^I swear I’m not exaggerating.

^^Identification isn’t my problem.  Intimidation is.