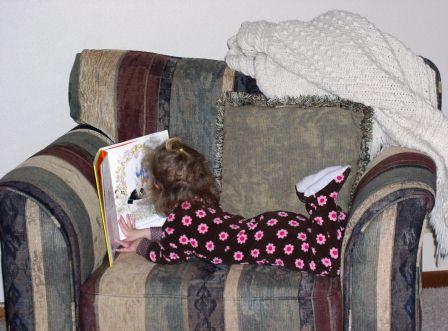 If her big sister is a gift—and she is—then this kid is my miracle.  In 2002, I had health issues and a hinky hypothalamus and while we were trying to have a second child, there wasn’t any guarantee.

And then I started having some of the symptoms on my red-flag list and called my endocrinologist, who suggested I take a pregnancy test before I started panicking.

I did . . . and the rest is family history, including a chapter on a special little kid who decided to celebrate her entrance in this world by playing an early April Fool’s joke on her mother.

She’s sunshine and cloud cover and bounce—and has amazing taste in jammies, hats, and mismatched socks.

There’s no real reason for any of this, except I like octopuses* and it’s my blog.

Soliloquy Octopus Hams it Up

What does Sir Octopus wear when it gets cold?

A coat of arms.

Octopuses have three hearts and their blood is blue.

I don’t know whether to attempt a poem about this or try an undersea crime piece about a vulgaris private-eye who falls in love with the society Octopoda who hired him to find out who turned her beloved father into sushi:

“Hold me!  Hold me in all your arms until we drift someplace far away from here . . .”

“I’m no good for you, Cirrina.  I’m from the wrong side of the genus.”

How do you make a baby octopus laugh? 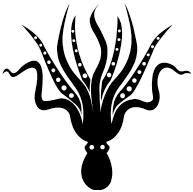 A guy walks into a bar with an octopus. He sits the octopus down on a stool and tells everyone in the bar that he’ll bet anyone $50 that this octopus can play any musical instrument.

Finally, a Scotsman walks up with a set of bagpipes. He sits them down and the octopus fumbles with them for a minute before putting them down with a confused look.

The octopus looks up at him and says, “Play it? I’m going to mate with it as soon as I figure out how to get its pajamas off.”

I can’t decide whether this is obscene or just really, really cool:

Maybe both?  But I’m fascinated with the way it blooms into its own colors.

*The plural, or so I’m told, isn’t octopi—supposedly, that word came into use because several people mistakenly thought octopus was one of those Latin words that declench, or whatever it is Latin words do, squeezing  -us into -i in the process—which to my unsophisticated mind seems a bit backwards when I am clearly fewer than us.  But it isn’t one of those.  And as someone once told me, why would you ever give up the opportunity to say octopuses in public, anyway?

**I said adult, not mature. 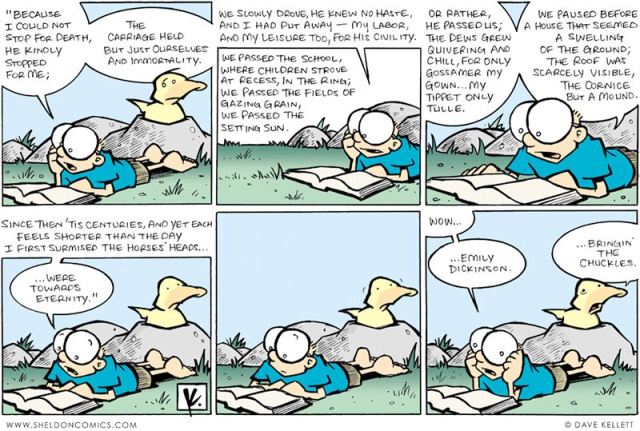 And while I’d argue that Christina Rossetti* would be a closer match to Wednesday’s style, I get the point:  Emily Dickenson’s stuff  might be whimsical, but most of it ain’t light-and-fluffy whimsical.

I mean, even that bird of hers bit that poor anthropomorphized** worm in half.   And there are times when her penchant for layered thought doesn’t quite fit the bill.

But I like her poems anyway, or most of ‘em—she wrote over four hundred, so there’s something in her oeuvre for almost everyone, even those of us who prefer not to dwell on our own mortality, thanks so very much.***

And I can’t help but adore her definition of poetry:

I’m not going to bother with a biography today—there are a million of ‘em out there written by far more articulate people and I stayed up way too late last night trying to bend characters to my mighty will,^ so I’m even less articulate than usual.

But look her up if you have a minute—she was a fascinating woman who may or may not have led exactly the life she wanted.  And her poems are over 125 years old and still being read and interpreted and quoted.

So no matter what some talking ducks might think, the lady clearly had it going on.

Here are a few of her verses that speak to me, or at least speak to me today^^—it varies.   If I’ve missed one of your favorites—and odds are, I have— please share them in the comments.

Tell All The Truth

Tell all the truth but tell it slant,
Success in circuit lies,
Too bright for our infirm delight
The truth’s superb surprise;

As lightning to the children eased
With explanation kind,
The truth must dazzle gradually
Or every man be blind.

A Word is dead
When it is said,
Some say.
I say it just
Begins to live
That day.

The Brain is wider than the sky,

For, put them side by side,
The one the other will include
With ease, and you beside.

The brain is deeper than the sea,
For, hold them, blue to blue,
The one the other will absorb,
As sponges, buckets do.

The brain is just the weight of God,
For, lift them, pound for pound,
And they will differ, if they do,
As syllable from sound.

I Lost a World
(Emily Dickenson)

I lost a world the other day.
Has anybody found?
You ’ll know it by the row of stars
Around its forehead bound.
A rich man might not notice it;
Yet to my frugal eye
Of more esteem than ducats.
Oh, find it, sir, for me!

Remembrance has a rear and front,—
’T is something like a house;
It has a garret also
For refuse and the mouse,

Besides, the deepest cellar
That ever mason hewed;
Look to it, by its fathoms
Ourselves be not pursued.

Sheldon® is one of the best webcomics ever produced, and Dave Kellett is its brilliant and essentially non-litigious creator.  Revere him.

**I might be exaggerating (and showing off) just a tad . . . But that line still seems a bit too nature red in beak and claw to me.

*** Plus, most of them are short, so when things get weird, at least they aren’t weird at length—which, especially after tackling Dante Alighieri, can come as something of a relief.

^Actually, I was bending the laws of  elevator physics while trying to ignore the fact that everyone is wired for instant communications.  We all came to an agreement in the end, I think—I finished up so stinkin’ late I’m afraid to look.

When I wrote yesterday’s post, I was bummed.  But some things happened later on to turn the day around and I thought I might share ‘em to balance things out a little.

First, my friend Cha Cha sent me this picture because she’d know I’d appreciate it:

How could I not cheer up, knowing that Richard Scarry was right and Gold Bug is real?*

We also went out to a late lunch (her) – early dinner (me) and commiserated about our day.  Misery really does love company.

When I got home, there was a package waiting for me:  Stephen Jay Schwartz, whose Murderati challenge I won a while back by guessing books by their first lines,** sent me not just the promised hardcover

of Beat,*** his newest Hayden Glass book, but a copy of the previous book, too!

And  he inscribed both.

Unexpected books, kind words, and the reminder of a victory . . .  That’ll cure a Monday.

And then, of course, a bunch of you took the time to send me sympathy here and e-mails there and poems and one hilarious-in-retrospect story that trumps my brainfail all to hell but I had to promise never to tell anyone, ever, I mean it.^

Aaaaand to cap it all off, there was half a container of this left in the freezer, which was a minor miracle, let me tell you:

While I partook of this miracle, I managed to rework more of that lost scene and fix a bit of Pigeon.

*If you don’t know what I’m talking about, go get a Richard Scarry’s Big Book of Something and look for Gold Bug.  Waldo is an upstart whippersnapper.

**No idea how I won, except most of the books are favorites of mine and I could see several of the titles across the room from me.  I’m still kicking myself over missing the Raymond Chandler and the Sherlock Holmes story.

*** I love this book and loaned my original copy to a friend who says he can’t find it, though I sincerely doubt this.  Doesn’t matter now—he can keep it.  But he’s never getting his mitts on my copy of Boulevard.

^ So I won’t, don’t worry, but I’ve been giggling all day and won’t ever be able to look at a lemon again . . . You rock, and don’t forget it.  And you’d better write that down yourself or I’ll swipe it.

Sometime between Saturday and this morning, I lost  a nine-hundred and seventeen word scene for a Red Robin project.*

This is exactly why you don’t ever congratulate yourself about bringing something in well under deadline because your butt is as good as bit the moment that thought is thinked, or worse yet, vocalized.

I’ve got my notes, the sketchy outline I spent most of Friday evening and Saturday morning filling out . . .  but no scene.

Before each of you wonderful, supportive people send me comments and commiserations about the importance of backing up Each and Every Time,  I swear to you, loudly and thoroughly, that I did—I can be taught and I learned my lesson after the Laundered Flash Drive Incident almost exactly a year ago.

But before I backed up my document,  I must have confused drafts and pasted the contents of the older draft into the newer document.  So I have two backups of the sketchy outline. . .

Feel free to comment about that, I deserve it.

The right stuff is gone.  Nine-hundred words.  Just like that.

I spent the whole morning trying to reconstruct the scene** and while the results aren’t bad, they aren’t as good as I remember.

Anyone want to share any similar moments of Gaaaaah?  I’d love to know I’m in the middle of the Boneheaded Moves Bell Curve instead of way out here at the end . . . .

*Five people (this time around—more than seven and we tend to lose the thread of the thing) playing “Can you?” with a premise.  We each add a scene or chapter to the story in rotation, being very careful to end each of our contributions in a way guaranteed to make the next person in line pull out their hair and send e-mails like, “Really?  A tadpole?  Really?!”

**After running around looking at every file that might possibly be it (no) and then doing it again in case I missed something (no) and a third time just in case (no) and then seeing if I’d e-mailed it to anyone without remembering I’d do so (no) or if I’d saved any scraps of it in the places where I save scraps (no) and then calling myself every name in the book and reeling from the sudden, depressive weight of having to recreate what suddenly felt  like the Best Thing I Have Ever Written.